Half of the British public take no interest in the political party conferences, and most people remain deeply cynical about politicians. However, as the autumn conference round got underway, polling by Kantar Public shows that David Cameron is the most highly rated of the leaders of the main parties.

Nearly three quarters of the 1217 adults surveyed (72%) think politicians are more interested in furthering their own careers than in doing the right thing for the people of Britain and 60% think they do not represent “people like me”.

Two thirds (65%) believe that what happens in politics has a direct effect on them and nearly as many (62%) see voting as a duty. But only 39% are interested in politics and only half (51%) think that their vote has an impact on politics and public affairs.

Half (53%) of those surveyed said the party conferences were of no interest to them, only 13% said they had an influence on their voting choice and 43% didn’t know the conferences were just about to get underway when they were interviewed.

Only 21% agree that women are well represented in British politics (37% disagree) and 41% think Britain would be a better place to live if women were more represented in politics, with only 10% disagreeing.

Mr Cameron, Ed Miliband and Nick Clegg are all rated negatively by voters, but 42% think that the Prime Minister is performing well as leader of his party, against 26% for Mr Miliband and 28% for Mr Clegg.

The Tory leader commands the confidence of his own party’s supporters, with 92% saying he is performing well, against 66% of Labour voters saying the same for Mr Miliband and 63% of Liberal Democrat supporters backing Mr Clegg.

Not only is Mr Cameron more popular than Mr Miliband, but the momentum seems to be in the Prime Minister’s direction. Compared this time last year, confidence in Mr Cameron has increased by five percentage points, whereas confidence in Mr Miliband has decreased by four points. The percentage of people that think that David Cameron is performing well as a party leader has gone up five points whereas the figure for Ed Miliband has gone down seven points.

Two in five voters (40%) currently have confidence in Mr Cameron’s ability to tackle the UK’s problems, against 25% for Mr Miliband and 23% for Mr Clegg.

The economy inevitably dominates those problems as seen by voters. Generating economic growth is the main concern, with 50% placing it in their top three issues. Reducing unemployment and imposing stricter border controls each scored 42% with reducing the national debt at 31%, ahead of reducing inequality (28%).

There appears to be little confidence that the main parties can be effective in confronting these problems. Asked what kind of government would be best placed to deal with the economic challenges facing the UK, 19% favour a Conservative government and 16% a Labour administration. Coalitions are not rated highly, with 7% favouring the Conservatives in alliance with the Liberal Democrats, 6% backing the Conservatives in coalition with UKIP and 6% wanting to see the Liberal Democrats hook up with Labour.

More than a third (38%) believe that no party or combination of parties could deal with the economy. 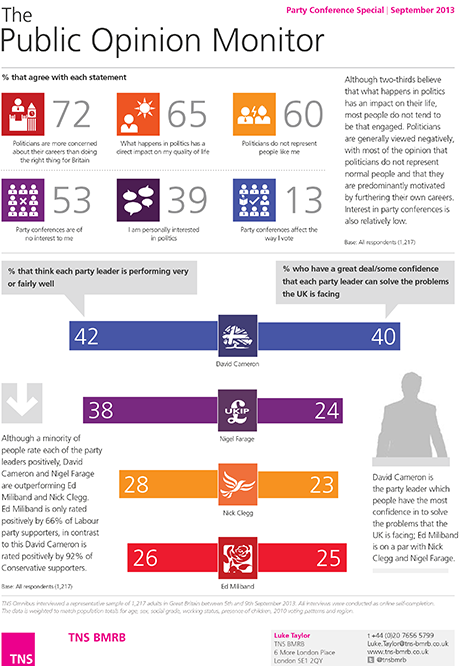 Notes to editors
Detailed tables for this survey can be found below. Please treat with caution those figures where the sample size – the unweighted base – is less than 50.

TNS Omnibus interviewed a representative sample of 1,217 people between 5th and 9th September 2013.

All interviews were conducted as online self-completion. The data is weighted to match population totals for age, sex, social grade, working status, presence of children, 2010 voting patterns and region.

About Kantar Public
Kantar Public is a leading provider of specialist social research, offering insight into public policy to government and not-for-profit clients. Delivering a range of approaches including bespoke proprietary research and consultancy, random probability survey capabilities, as well as social marketing and polling, our work informs policy makers across national and local Government at the highest level. Kantar Public forms part of the Kantar group of companies.